The president made an unannounced stop at Ross', a 24-hour local eatery in Bettendorf, Iowa, owned by a woman he met at an Aug. 25, 2008, town hall meeting.

Cynthia Freidhof, the owner, amused Obama at the town hall with her description of the sandwiches sold at Ross': the Magic Mountain (Texas toast grilled, loose steamed hamburger meat, choice of french fries or hash browns, homemade cheddar cheese, onions) and the Volcano (the Magic Mountain plus spicy hot chili on top).

During the 2008 town hall at the Mississippi Valley Fairgrounds, which was for undecided voters, Obama said he would make it one day to Ross'.

He greeted Freidhof, who was shocked and very excited.

"How are you doing? We came to order some food," Obama said.

He held up an enormous cinnamon roll, about six inches in diameter.

"I'm not sure I'm going to be able to eat one of these," Obama joked.

He was then given a description of the sandwiches.

"Anybody who wants one, I will buy it for you," Obama said. "Anybody in the press corps has to eat the whole thing. I already got some takers on the plane though, so we're going to order four Magic Mountains and two Volcanos."

"Any takers on the press?" Obama asked.

"You chickens," he said.

Obama then turned his attention to Freidhof.

"So business is going ok?" Obama asked her.

"It is going ok, it is ok, yeah," Freidhof said before quickly changing the subject. She said a woman told her Obama would stop by Ross' one day, that "he is a man of his word. I didn't believe her."

He worked his way through the restaurant, taking pictures and shaking hands.

She said she wasn't given a heads up on the visit. She was standing outside the restaurant to watch the motorcade and saw it turn into her business, which was started by her father in 1940.

"I hope he brought his antacids because he said he's going to need one after he eats the Magic Mountain, he thinks, but I don't think so," she said.

She renamed it the "Presidential Magic Mountain" for the day.

"This is just beyond," Freidhof said.

She said she still supports the president and that she would do everything she can to help him win Iowa.

"I think he is doing the very best he can with the way things are," she said.

A local reporter said Guiliani stopped by Ross' a few years ago.
-
The president arrived at 12:41 pm at the Alcoa factory. The streets were thick with onlookers.
Posted by Illinois Channel at 2:11 PM No comments:

SPRINGFIELD – The second trial of Illinois’ 40th Governor Rod Blagojevich has cast the spotlight on legal troubles that have plagued the state’s chief executives in the past. A summary of the more notable examples follows, as compiled by the Illinois Historic Preservation Agency and relying for reference on The Illinois Governors: Mostly Good and Competent by the late Robert P. Howard, and revised and updated by Taylor Pensoneau and Peggy Boyer Long.

Joel Matteson, 10th Governor
Democrat, 1853 - 1857
The first legally embattled governor was Joel Aldrich Matteson, after whom the Village of Matteson in southern Cook County is named. During his term in 1856, he began redeeming outdated and/or previously redeemed canal scrip for state bonds. Matteson was discovered three years later, after his term as Governor was over. The subsequent court proceedings, including accusations of bribery and jury tampering, went on until 1863, when the Sangamon County Circuit Court declared Matteson owed the state more than $253,000. Matteson’s property was sold at auction to satisfy the judgment.

Len Small, 26th Governor
Republican, 1921 - 1929
Governor Len Small was indicted in 1921 on charges that he ran a money laundering scheme during his tenure as State Treasurer. He was acquitted amid rumors of jury tampering; in fact, after the trial, four jurors received state jobs. Later, in 1927, a civil suit was brought against Small for the same money laundering scheme. He lost that case, and the judgment was more than $1 million, an amount that was reduced to $650,000 by Attorney General Oscar Carlstrom, whom Small had helped to elect in 1924.

William G. Stratton, 32nd Governor
Republican, 1953 - 1961
William G. Stratton was indicted in 1964 on charges of violating income tax laws relating to political contributions during his term as Governor. He was acquitted during an expensive trial after defense witness Senator Everett M. Dirksen testified that governors have official ceremonial duties for which the unrestricted use of campaign fund contributions is justified. The U.S. Tax Court later agreed with the verdict, ruling that the Internal Revenue Service should not assess a tax on outright unrestricted gifts.

Otto Kerner, 33rd Governor
Democrat, 1961 – 1968
Otto Kerner was convicted in 1973 on 17 counts of bribery, conspiracy, perjury and other charges relating to Illinois race track stock deals that occurred after his term in office. He was sentenced to three years in prison. The federal prosecutor in the case was James R. Thompson, who would later be elected Governor, and whose law firm would later defend another Illinois Governor, George H. Ryan.

Dan Walker, 36th Governor
Democrat, 1973 – 1977
Dan Walker was convicted and sent to prison in 1987, ten years after leaving office, for misusing funds from his failed First American Savings and Loan Association of Oak Brook. The conviction was unrelated to his service as Governor.

George Ryan, 39th Governor
Republican, 1999 - 2003
George Ryan is currently serving 6 ½ years in federal prison after he was convicted in 2006 by a federal jury of 18 counts of criminal misconduct, including a racketeering conspiracy, mostly related to his service as Illinois Secretary of State from 1990 to 1998.
Posted by Illinois Channel at 5:50 PM No comments:

CHICAGO – June 27, 2011 – “The guilty verdict against former Governor Rod Blagojevich closes a long, embarrassing chapter for the citizens of Illinois. He deserves everything he’s going to get.”
Posted by Illinois Channel at 2:43 PM No comments: 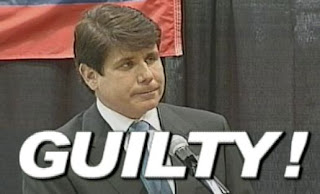 The sentencing of the former governor is not set at this time, but he could spend the rest of his life in jail, though some observers think that unlikely. It is fair to say Rod Blagojevich may, at a minimum, spend the next decade of his life in jail.
Posted by Illinois Channel at 2:26 PM No comments:

Gov Quinn on the Passing of Rep Mark Baubien (R)


“Mark Beaubien dedicated his life to service and making his community a better place. As a state representative, he served the people of the 52nd District with integrity and fortitude, and his sudden passing is a tremendous loss.

“My thoughts and prayers go out to Mark’s wife Dee and their two sons on this sad day.”
Posted by Illinois Channel at 10:31 PM No comments: