NOTE: Sears has threatened to leave Illinois if tax relief was not granted by the end of this year. The Senate passed a bill that would have granted tax relief to Sears and the Chicago Mercantile Exchange [CME], but this bill was defeated by an overwhelming vote in the Illinois House, where members voted 99 against to only 8 votes in favor of passage.

By now many of you have seen or heard the news stories reported by several news outlets speculating on the possibility of moving our company from Hoffman Estates as a result of last night’s Illinois House vote.

We are disappointed that the legislature was not able to reach agreement and pass a package that will help us remain an Illinois company. We received solid support for our portion of the legislation and are hopeful that the unrelated issues, including the earned income tax credit provision, will be resolved in short order by prudent leadership. You should know that our portion of the bill was endorsed on the record by representatives of both Hoffman Estates and District 300. The fight is not over, and we continue to work toward a resolution. Yesterday was another step in this process. But a final decision has not yet been made.

Our commitment to you remains the same; to be thorough in our review of all of our options. We hope that lawmakers will achieve a compromise very soon as our timeline for making a decision about our future by the end of the year has not changed.

We will keep you apprised of any significant developments.
Posted by Illinois Channel at 4:29 PM No comments:

Posted by Illinois Channel at 12:02 PM No comments:

AUDIO: Dea Meyer of the Civic Cmte Talks About How Pension Debt Has Already Kept at Least One Firm From Moving to IL

Nov 19, 2011: Dea Meyer of the Civic Cmte of the Commercial Club, was one of the participants talking about Illinois' pensions, on a panel at the IL Assn of School Boards Annual Conference. In this clip Ms Meyer is talking about how one business, that was looking to relocate, quickly wrote off Illinois as a location, due to it's overwhelming pension debt, and it's refusal to address the problem in a significant way.

The Civic Cmte of the Commercial Club of Chicago is one of the primary supporters of SB-512, the Pension Reform bill, that would create a three-tiered pension benefit system for state employees, and thus save the state millions in future obligations.

WASHINGTON- Today, Congressman Joe Walsh (IL-8) sent a letter with 39 of his colleagues to President Obama asking for Holder’s immediate resignation. Congressman Walsh sent a letter directly to the Attorney General in late October asking him to take responsibility for his role in Operation Fast and Furious and to step down, but the Attorney General has continued to stonewall Congress and the subsequent investigation.

Walsh stated: “The American people deserve to know the truth regarding Attorney General Eric Holder’s knowledge and role in Operation Fast and Furious. Throughout this investigation, the Attorney General has back-pedaled on his testimony, tried to cover his tracks, and has been unwilling to cooperate with the Congressional investigation. This is simply unacceptable.

“The Attorney General oversaw a department which carried out an operation that left a U.S. border patrol agent dead, illegally sold 2,000 weapons to Mexican cartels, and attempted to build a case for gun control. Operation Fast and Furious was a tragic mistake. The American people deserve more than this from their government and the Attorney General needs to give answers, not more false testimony.

“Attorney General Eric Holder is supposed to enforce the laws of this nation, not try to break them. It’s time he goes.”
Posted by Illinois Channel at 3:12 PM 1 comment: 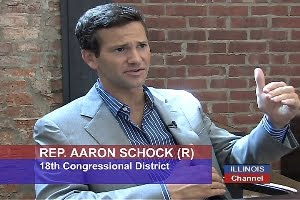 Washington, DC – Congressman Aaron Schock (R-IL) is urging the White House to reconsider its decision to postpone final approval of the Keystone XL pipeline following the announcement last week that a decision would be delayed until after the 2012 elections. A move many have criticized as a politically calculated choice by the Administration that delays development of important domestic energy resources and prevents the creation of thousands of new American jobs.

Schock joined with others in Congress today in sending a letter to President Obama urging him to take action before the end of the year, which is in line with the Department of State’s longstanding public time frame. This is the second letter Schock has sent to the Administration this year on the need for a final decision to be made on the Keystone pipeline.

“I just held a press conference last week on the need for the United States to incorporate domestic energy production with job creation. The news that the Administration is now delaying a final decision is an outrageous setback for job creators and those looking for work. The reality is this announcement to punt a final decision was not based on sound policy, but partisan politics. At a time when millions of Americans are out of work, the 20,000 jobs that would have been created by the final approval of the Keystone XL pipeline shows that the priorities of the White House are very different than that of the rest of the country.

“For months I have been touting the benefits of linking a robust transportation infrastructure bill to domestic energy production to both reinvest in our nation’s deteriorating highways, bridges and rails and to also create an environment for job growth immediately and in to the future. Since taking office, the Obama Administration has stood in the way of American energy production, decisions that have cost this country jobs, made us less secure and raised energy prices. Since January 2009, the national average for a gallon of gas has doubled from $1.84 per gallon to $3.44 per gallon today.

“In numerous instances this year the House has acted and passed legislation focused on domestic energy production, including voting to expedite the approval of the Keystone XL pipeline. As with over 100 other pieces of legislation, the Senate has yet to act. I believe now is the time for both the Senate and the President to move forward and ensure the approval of the Keystone pipeline is approved by the end of the year. Failure to do so will further set us back in terms of job creation and domestic energy production.”

Earlier this year, Schock voted for the House passed H.R. 1938, North-American Made Energy Security Act, that required a decision to be made by the Obama administration on the Keystone XL project by November 1.
Posted by Illinois Channel at 11:51 AM No comments:

In a letter to residents of the Illinois 24th Senatorial District, former Illinois Attorney General Jim Ryan and several noteworthy leaders endorsed Illinois State Senator Kirk Dillard (R-Westmont) in his bid for reelection. Considered one of the most successful prosecutors in the state, Ryan has earned the respect and admiration of many throughout Illinois.

Ryan called Dillard, “One of the finest and most honorable people I have known.” He cited Dillard’s work when Ryan was Attorney General, specifically Dillard’s sponsorship of Ryan’s “Safe to Learn” Act which helps ensure children’s school safety. “Few people in politics earn the respect that Senator Dillard has over his distinguished career.” The readers of West Suburban Living voted Dillard to be the local politician with the most integrity. Ryan went on to say, “We need a Senator that has the broad experience, proper demeanor, and integrity to represent the entire district. Senator Dillard is clearly that person.”

After receiving the news of his endorsement, Dillard said, “I am humbled to receive the endorsements. It is an honor that these community leaders are supporting me in my reelection efforts. I am completely committed to continuing serving this area.”

Just as the country finally begins to refocus on our crippling $15 trillion national debt and the unacceptably high unemployment rate, now activist celebrity lawyer Gloria Allred is bringing forth more false accusations against the character of Republican front-runner Herman Cain.

All allegations of harassment against Mr. Cain are completely false. Mr. Cain has never harassed anyone. Fortunately the American people will not allow Mr. Cain’s bold “9-9-9 Plan”, clear foreign policy vision and plans for energy independence to be overshadowed by these bogus attacks.
Posted by Illinois Channel at 10:06 AM No comments:

At the Union League Club of Chicago, Gov Scott Walker of Wisconsin talks about the reforms he brought to Wisconsin government and what he says are already tangible results. Gov Walker talked too, about the problems troubling Illinois, and why he feels Illinois is moving in the wrong direction by raising taxes to solve its budget problems.

Early on, the Governor's remarks were interrupted by members of Occupy Chicago, chanting and yelling during his speech. This went on for about 5 mins. We've edited their distruption to one minute, to give viewers a flavor of their tactics.

Posted by Illinois Channel at 8:53 PM No comments:

#
Posted by Illinois Channel at 7:33 PM No comments: