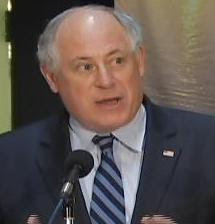 from the Gov's press office


“Illinois is a top competitor in the global economy, and our aggressive plans to double exports and develop innovative new partnerships in emerging technology fields are continuing to advance our growth on the international stage,” Governor Quinn said. “Our state has the resources, human capital, and innovative drive to expand our global reach. These agreements represent Illinois’ ongoing commitment to continue to compete and grow in the global marketplace.”


During his visit to Beijing today, Governor Quinn announced that Goldwind, one of the largest wind turbine manufacturers in the world, will build a $200 million wind farm in Lee County, Illinois. The company will break ground on the Shady Oaks project later this fall. Once online, the project will provide 109.5 megawatts (MW) of power, and create more than 100 construction and a dozen permanent maintenance jobs in Illinois. According to the American Wind Energy Association, one megawatt of wind energy can provide enough electricity to meet the needs of 225-300 households. Therefore, 109.5 MW can provide the electricity needs of approximately 25,000 homes.

“As the largest and most competitive market in the world, the United States is a key component of Goldwind’s international growth. Thanks to visionary leaders like Governor Quinn, Goldwind and other renewable energy companies are able to generate an undeniable economic impact in the U.S. wind industry through job creation and supplier agreements,” said Goldwind Chairman and CEO Wu Gang. “Goldwind has generated a competitive global footprint and we are focused on continuing that momentum, continuing to demonstrate our technology advantages and continuing to build-out our global supply chain.”

Goldwind USA Inc. is the U.S. subsidiary of Xinjiang Goldwind Science & Technology Co, LTD, based in Urumqi, Xinjiang, China. Goldwind USA established its headquarters in Chicago in 2010 to oversee operations in North and South America.


Governor Quinn also announced that Archer Daniels Midland Company (ADM), a worldwide food production company based in Decatur, Illinois, has entered into a $100 million sales agreement with Jiusan Oils and Seeds. Under the agreement, ADM will supply Jiusan Oils and Seeds, a manufacturer of soy products based in Harbin, Helongjiang, China, with 180,000 metric tons of soybeans by December 2012.


China is the world’s largest market for Illinois soybeans, importing more than 104 million bushels of U.S. soybeans in the 2009/2010 marketing year valued at more than $160 million. Illinois is among the top five states in agricultural exports to China. Illinois agriculture exports to China have increased each year since 2007, from $149 million to $424 million in 2010.

For updates on Governor Quinn’s trip, visit www.Illinois.gov or follow him on Twitter at @GovernorQuinn. More information about Illinois trade and business opportunities can be found on the Illinois Department of Commerce and Economic Opportunity’s website at www.illinoisbiz.biz.